The Legitimacy of Enemy Actors: Can ISIS be Classified as a Pseudo-State? 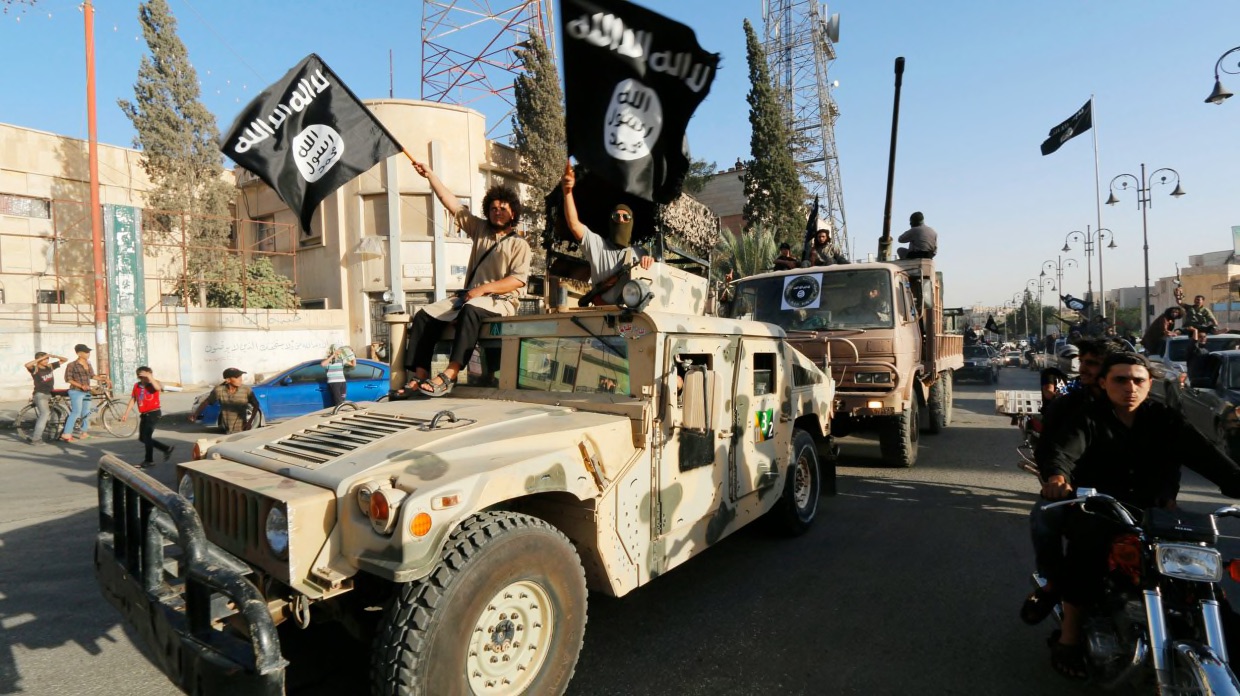 In a March 2015 article for Foreign Affairs, Audrey Cronin, a professor at American University and George Mason University, makes the claim that ISIS is not a terror group. She claims that they are instead, “a pseudo-state led by a conventional army…[and] boasts some 30,000 fighters, holds territory in both Iraq and Syria, maintains extensive military capabilities, controls lines of communication, commands infrastructure, funds itself, and engages in sophisticated military operations,” stating that this is more indicative of a pseudo-state than a terrorist group.

She further goes on in her essay to criticize the counterterrorism doctrine being utilized against ISIS, writing, “Isis…seeks to control territory and create a “pure” Sunni Islamist state governed by a brutal interpretation of Sharia; to immediately obliterate the political borders of the Middle East that were created by Western powers in the twentieth century; and to position itself as the sole political, religious, and military authority over all of the world's Muslims…Neither counterterrorism, nor counterinsurgency, nor conventional warfare is likely to afford Washington a clear-cut victory against the group. For the time being, at least, the policy that best matches ends and means and that has the best chance of securing U.S. interests is one of offensive containment: combining a limited military campaign with a major diplomatic and economic effort to weaken ISIS and align the interests of the many countries that are threatened by the group's advance”. Basically, she states that the counterterrorism and counterinsurgency strategies currently employed by the U.S. government is not doing much to actually combat the group.

To get at the heart of terrorism, one must define what terrorism is. Bruce Hoffman in his book Inside Terrorism defines terrorism as, “the deliberate creation and exploitation of fear through violence or the threat of violence in the pursuit of political change”. Making this definition after examining the historical usage and development of the word, I feel this is a definition that most people are able to agree with. Taking this definition, we can apply this to ISIS tactics and determine if they can be classified as terroristic. The bombings of three hotels in Jordan resulting in the deaths of nearly 60 people, the capturing and burning aliveof a Jordanian Air Force pilot while recording the act, the burning of two churches in Raqqa, Syria, setting car bombs throughout Damascus, and performing countless suicide and regular bombings of civilian and military targets throughout the Middle East and Europe. These are decisive actions that are emblematic of an insurgency type operation, however, exploring the motivations and underlying factors behind this is essential to determining if they have a political motivation.

Hoffman also discusses ISIS in his book, writing about them in detail and comparing them to al-Qaeda.

He writes, “Like al-Qaeda, ISIS also seeks to restore the caliphate and thereby ensure that a rigidly fundamentalist interpretation of Islam becomes the only accepted religion and Sharia, the legal system based on Islamic religious precepts drawn from Qur’an and Hadith, the only law…[When al-Baghdadi declared himself caliph and broke from al-Qaeda, he] aimed to achieve what bin Laden had only promised: nothing less than redrawing the map of the Middle East, erasing the artificial states and contrived borders created by the Western powers following World War I, while resurrecting the Muslim empire that once stretched from Spain across North Africa, through the Middle East and the Caucasus, into South and Southeast Asia…It should be noted, however, that the difference between ISIS and al-Qaeda have thus far been more in style and tone than in substance and principle of resistance to Western influence and enrichment and the unstinting defense of Muslim lands…The need for global jihad to defeat these enemies is thus as integral as an aspect of ISIS’s mind-set as it is of al-Qaeda’s. Both movements, moreover share the same view that the Western liberal state system is inimical to Islam…Like al-Qaeda, ISIS also rails against the West’s exploitation and expropriation of the Muslims’ most previous natural resources and the established order’s creation and support of corrupt, compliant local regimes that facilitate the ongoing plundering of the Muslim world”.

There are inherent political goals here, to create a new nation, a new Umayyad Caliphate and regain the glory of a religious nation following the strict laws under Sharia. The goals of ISIS are very politically oriented and mirror al-Qaeda’s own interests. The usage of violence to carry this out falls in line with how Hoffman defines terrorism.

I do agree that ISIS operates on a much different level than al-Qaeda. Abu Musab al-Zarqawi is often described in the media far different than bin Laden; whereas bin Laden was described as this quiet, theologian type, billionaire who could galvanize massive numbers, al-Zarqawi was described as a thug, a brawler, and more along the lines of a criminal (these interpretations are somewhat correct; bin Laden’s family was worth billions, with bin Laden having had an estimated worth of around $300 million USD). However, to try and call ISIS a non-terrorist entity is not a correct assumption and one not supported by the evidence of how this group functions nor what their goals and intentions are. It is undeniable that ISIS is engaging in broad criminal activity ranging from drug trafficking to sexual slavery/human trafficking to illicit financial activity and this type of activity is not what al-Qaeda has previously engaged themselves in, however, it is indicative of a changing format rather than something other than a terrorist enterprise.

Peter Mansoor, a former U.S. Army Colonel and premier historian on counterinsurgency, has written that, “ISIS is the archetypal hybrid threat, combining elements of conventional armed forces, guerrilla warfare, terrorism, and criminal activity to form a potent challenge to stability in the Middle East and a threat to security worldwide…A counterterrorist strategy to defend against attacks at home combined with the targeted assassination of ISIS leaders overseas has proven to be insufficient to seriously degrade,” echoing sentiments that Cronin is getting at, yet states in the opening of his piece, “The Islamic State of Iraq and al-Sham (ISIS) is the modern face of terror”. Mansoor seemingly agrees that ISIS is a terrorist group and conducts itself as such.

I personally do not see the benefit in reclassifying ISIS as a non-terror group status. In my first impressions, I was believing that the author would recommend reclassifying ISIS as a criminal organization, which, while perhaps more accurate, would pose different problems in terms of enforcement and trying to root out the group. To me, reclassifying the status of the group is meaningless unless the tactics of combating such an organization change. The current tactics of and the ways in which counterinsurgency and counterterrorism being utilized are not working and are in need of reform to better combat ISIS. Lawrence Wright, a respected writer for The New Yorker and a popular writer of various topics on foreign policy, terrorism, and religion, wrote in the epilogue of his book The Terror Years, “Fighting terror is an expensive and clumsy enterprise. Great powers have often been humbled by small, motivated groups that are willing to kill and willing to die, as France learned in Algeria and Britain in Palestine”.

Overall, I agree that Cronin is correct in her aspects on terrorism and on ISIS; I agree that the current practices the U.S. and other Western nations have in place is not working against ISIS or other terror groups. I too agree that ISIS does control a wide swath of land and is effectively a large player in the Middle East that rivals legitimate governmental institutions. However, I disagree with the way Cronin has gone about describing her thesis. I think that Wright describes his perceptions (which are very similar to Cronin’s) in a far better and more detailed way, with him stating, “It is not even proper now to call it [ISIS] a terrorist group; it is a pronto-state that uses terror not just to conquer but to rule”. Wright is saying that yes ISIS does use terror to exact their goals (which are political) and controls a large area of land, yet emphasizes that they utilize terror to exact their goals and aims, something that I feel Cronin does not make clear in her article. Basically, I feel that Cronin does not explain her position well and the way in which she words her thesis allows for her point to be misconstrued and misunderstood.

To me, there are many ways in which ISIS can be combated against. It is apparent though that ISIS is engaged heavily in drug trafficking and production, the selling of oil seized often through violent means, the sale of antiquities, and extortion. Fundraising abroad through private donors in countries such as Saudi Arabia and Qatar are also a sizable amount of the estimated income for the group. The ability for ISIS to recruit via social media platforms and on relevant internet websites accounts for the vast majority of their gaining new recruits for their missions. The first step in dismantling ISIS would have to be a two-pronged fight on the internet and on the organization's coffers.

It is apparent that a group cannot properly function without a stable and steady form of income nor would they be able to function with dwindled manpower. The Department of Treasury's Office of Terrorism and Financial Intelligence (TFI), in conjunction with the State Department, must begin appealing and diplomatically working with foreign states (such as Saudi Arabia and Qatar) that are believed to be the source of much of ISIS's economic revenue in order to try and place a halt on what kinds of groups can be allowed to fundraise within the state's borders and more effectively cooperate with the financial law enforcement powers in said state. Within the United States, the federal government should start working with larger internet corporations and companies to limit the amount that ISIS can be able to advertise on social media and on the internet.

With such platforms as Twitter and Instagram and companies like Google and Apple to better monitor the types of sites that put out information praising ISIS action and examining if these sites assist in the aiding of the group either via direct fundraising or recruitment activities, ISIS's reach would be substantially limited. Working with other states' financial law enforcement and diplomatic agencies in addition to large internet giants would drastically help in limiting the ways in which ISIS can effectively operate.

On a second front, the U.S. must put an emphasis on unconventional warfare practices and small, limited engagements via special operations forces while utilizing precise and heavy airpower. The United States has a strong Air Force, the largest and most technologically advanced air power the world has seen and it should be using that power to combat ISIS forces, especially since ISIS has no air force to speak of nor could adequately combat such destructive power. Having a multi-pronged approach comprised of economic destabilization, the limiting of the group on social media and on the internet to recruit, and taking direct action in the form of special operations forces and superior air power is what should be performed in combating ISIS and other, similarly aligned non-state actors.